Posted on May 23, 2019 in Executive Spotlight by Julia Pyo

To call Arianna Huffington a thought leader would be an understatement of her achievements. Huffington, Founder of HuffPost and Thrive Global, has published fifteen books and has been named in Time Magazine’s list of the world’s 100 most influential people and the Forbes Most Powerful Women list. Despite these impressive, and to some, intimidating, accomplishments, Huffington maintains a well-rounded Instagram presence that successfully touts her thought leadership while simultaneously connecting with her audience on a more personal level. Let us investigate how this Influential Executive keeps in touch with her human side while inspiring her many followers.

Although we have no shortage of praise for Huffington’s diverse range of content—both in terms of its medium and its topics—it’s important to recognize that none of it is selected at random. Huffington explores every possible content type that will resonate with and appeal to her niche target demographic. In particular, she strives to appeal to female entrepreneurs, mothers, and ambitious women. Her bio begins with “Mother. Sister. @HuffPost Founder.” as if in order of importance. The message is clear: first and foremost, she is a mother and a sister like many other women, and that is an even more significant role than being the founder of a multi-million dollar organization. When highlighting influential figures outside of her immediate circle in her social posts, they are, more often than not, women. Many posts also highlight her personal experiences with motherhood or include a feminist message, empowering women to go beyond the status quo. 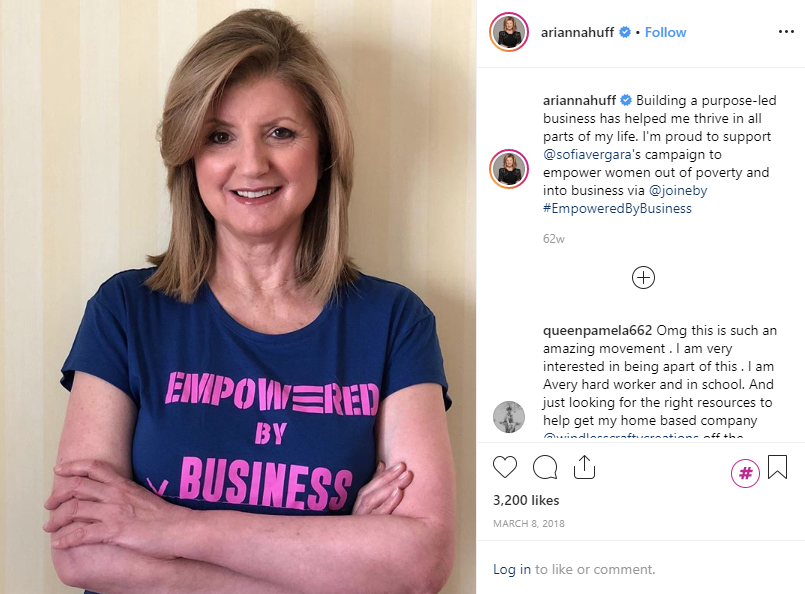 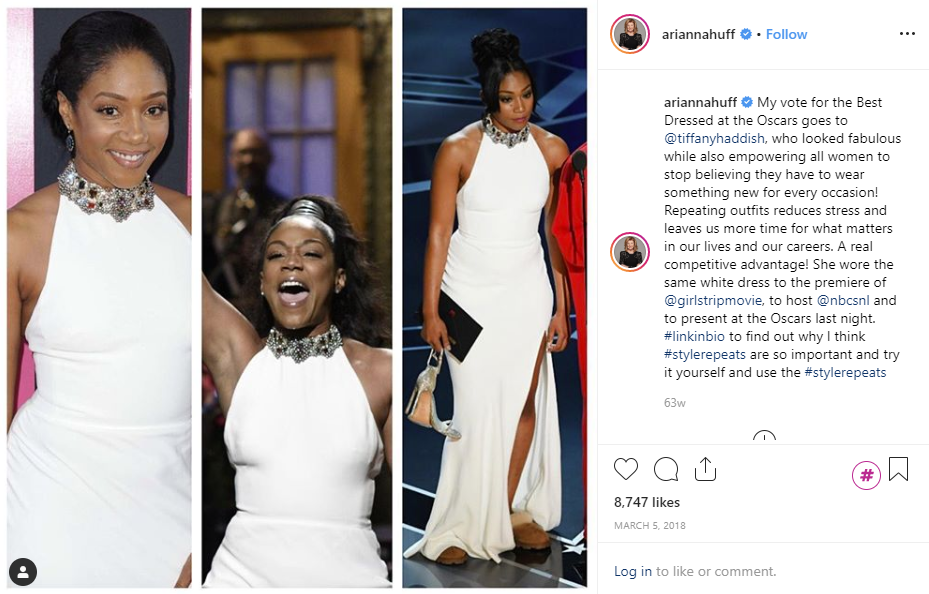 Taking even just a passing look at Huffington’s Instagram, it is apparent that whoever is managing the account knows exactly what they’re doing. Instantly, a user notices the pink circle around the profile picture, indicating a recent Story has been posted. Highlighted Stories are pinned to the profile and properly categorized so that new visitors can easily access whatever content they’re looking for, and while most of her posts are single images, she also takes advantage of Instagram’s IGTV feature, video clips, collages, and carousels of images. For an account that posts as frequently as hers, using every tool available is necessary to keep the engagement level consistent, and Huffington’s Instagram has certainly hit the mark on that front. 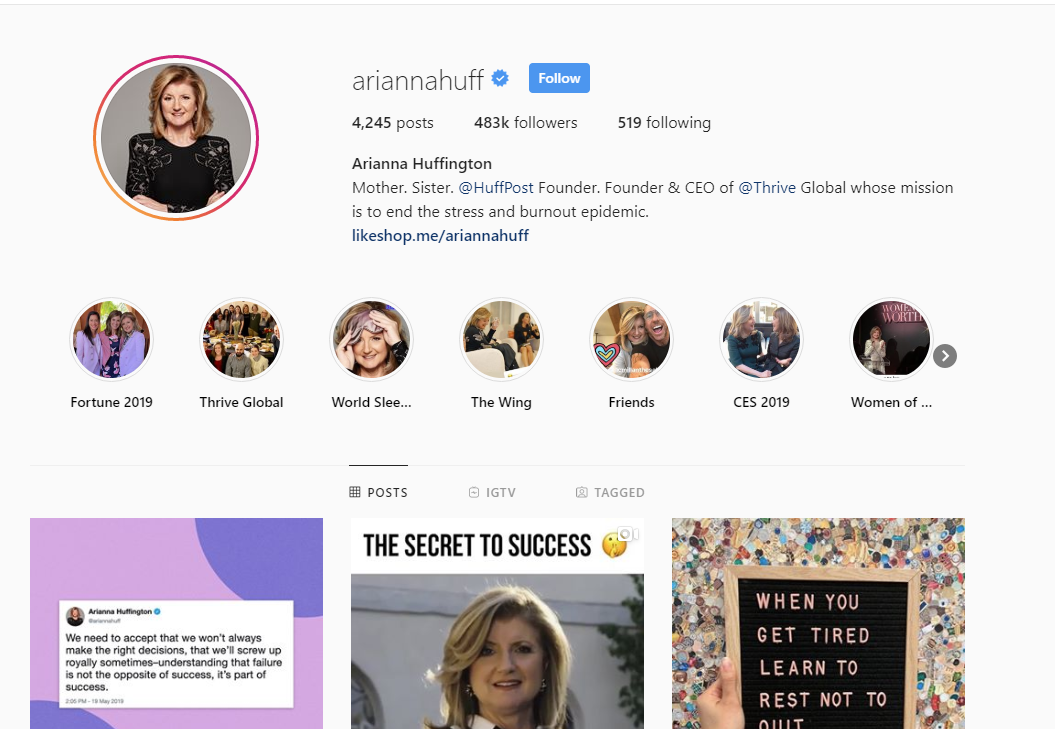 On a platform like Instagram, a personal touch is expected on the majority of the content, unlike other platforms like Twitter or LinkedIn, where one can get away with prioritizing informative over personalization. Appropriately, Huffington’s Instagram page features Huffington herself for the most part, whether it is in the form of an impromptu smartphone photo, a professional photoshoot, or a quote graphic attributed to her. Even infographics like the example below feature a caricature of Huffington to make the content feel as authentically hers as possible. 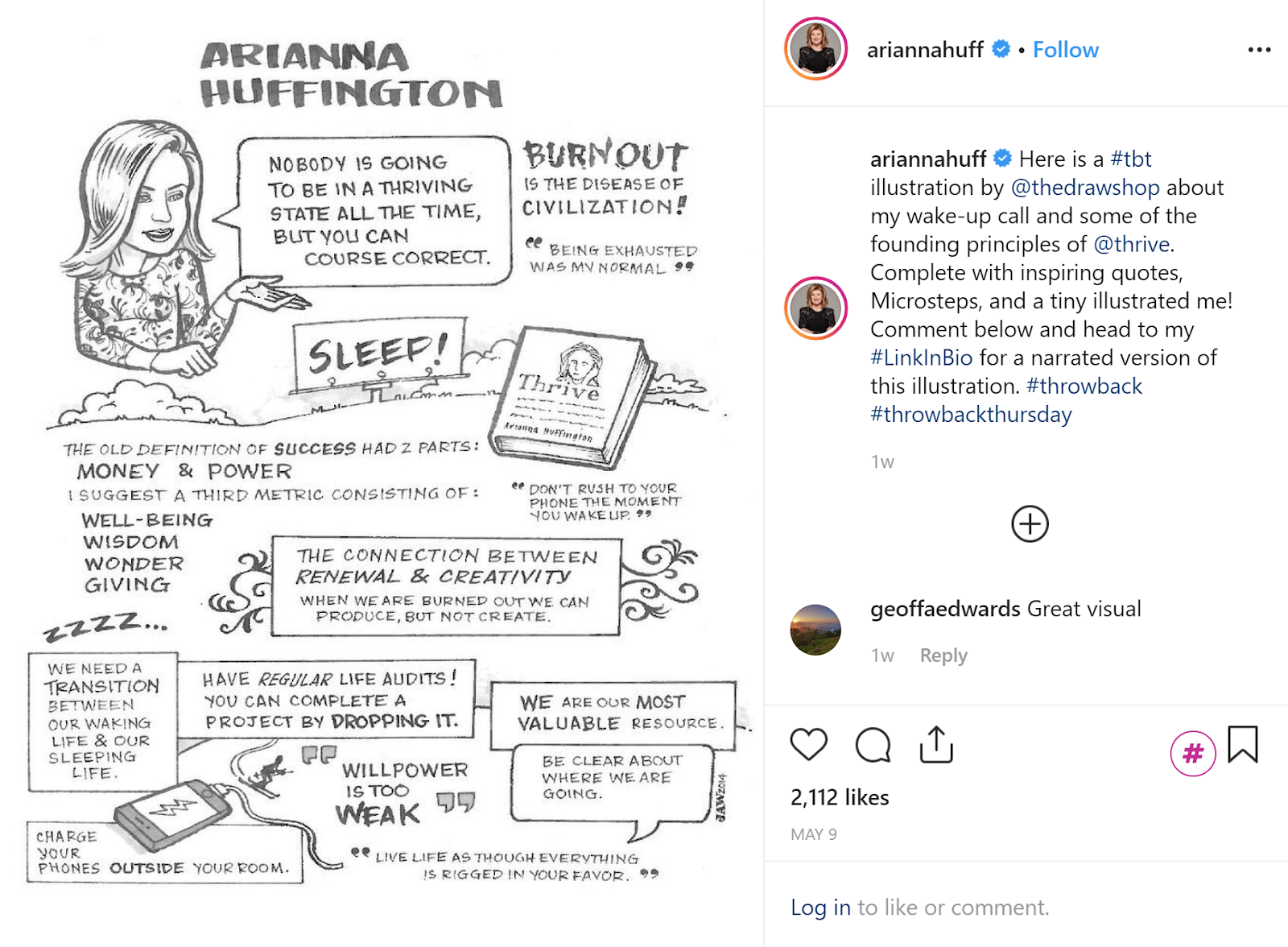 Huffington’s profile features many other creative ways to incorporate her presence, likely in order to supplement the limited number of unique photos featuring Huffington herself while keeping up a consistent posting cadence.

The Human Behind the Influencer

Just as Huffington uses a diverse range of content types to engage her audience, she also effectively alternates between different tones to strike a balance between being inspirational, informative, and—importantly for Instagram—human. Just as her bio highlights first and foremost the fact that she is a mother and a sister, so too does her content, such as this post of her recently engaged daughter: 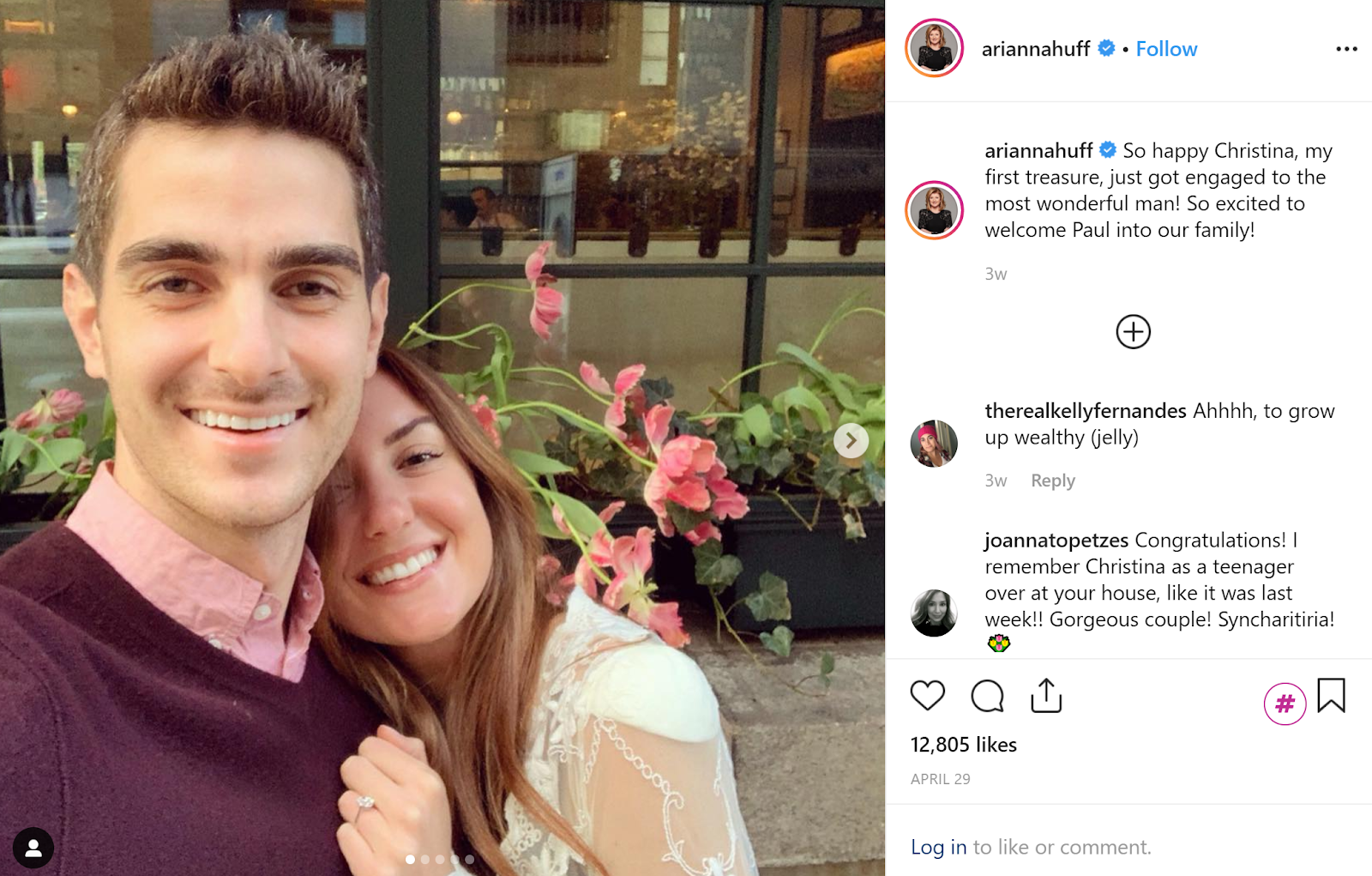 The caption is also appropriately emotional: Huffington expresses happiness, excitement, and names her daughter as her “treasure.” Although Huffington’s page uploads many motivational and informative posts, she always makes sure to provide a candid look at her human side.

Overall, Arianna Huffington’s Instagram content successfully asserts her executive presence, but most importantly, it also works to humanize a figure who could otherwise appear unrelatable to the everyday HuffPost reader. We can all take a page from her book.

To learn how executives can start building their online presence to achieve business goals, click the button below and schedule a consultation with our social media experts.

Which Social Media Platform Should CEOs Use? (Part Two)
In 2020, we published a guide on which social media apps CEOs should use and how executives can use ...
A Thought Leader in the Tech Industry
As the public face of such a recognizable company, Yang highlights company milestones and achievemen...
Executive Spotlight: Stephen Kelly
Stephen Kelly, the current Director of Kimble Apps (a professional services automation software) and...